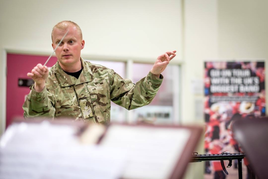 ​​​Ben Ruffer started his musical journey as a Chorister at Chichester Cathedral before joining Trinity College of Music where he studied the Violin, Trumpet and Organ.
​Having joined the Army in 2003, he was posted to The Band of The Life Guards.  Ben took part in every State Ceremonial event both as a band member and State Trumpeter; including TRH Duke and Duchess of Cambridge’s Royal Wedding, Diamond Jubilee, Diplomatic Receptions, Festival of Remembrance and the Queen’s Birthday Parade, where he was the Field Officer’s Trumpeter twice.

In September 2013, Ben returned to study, qualifying as a Bandmaster in August the following year.  He was awarded the Worshipful Company of Musicians medal for best overall student, and was assigned to The Band of The Royal Armoured Corps. In March 2017, Ben was posted back to the cavalry this time as Bandmaster of The Band of the Household Cavalry.  Whilst serving, Ben has deployed extensively around Europe, Africa, Afghanistan and South Korea.

Ben is married to Claire and they have two children, Felicity and Douglas.  He loves all things countryside, focusing on shooting including working their two dogs, plus he is a keen skier with a passion for Military History.